Before jumping into this authors spotlight I just wanted to mention that I had the pleasure of meeting this author in person at an event of which I was the guest speaker. I enjoyed talking with Untamed and I'm glad to see she's out there making moves in the right way.

About the Author: Hailing from Albany, GA, Author Untamed is an adult and urban fiction author who accredits her early education in magnet school programs for her creative mind and passion for the literary field. She first found a love of writing as a young child through her love of reading. It was the novel entitled, Coming of Age by Lorri Hewitt that truly inspired Untamed and became the flame that ignited her introduction to the pen and pad.
Untamed's writing journey began twenty years ago at thirteen years old with poetry, spoken word and short stories. Throughout her high school and college years, she received many accolades for her writing ability to include the Coca-Cola Young Writers Award and honorable mention in the Sandhills Writers’ Conference.
Deciding to pursue a career in business, Untamed set aside writing for years. However, after suffering the loss of her child, she felt a void in her life and began writing again to remain encouraged. Yet, the void still seemed to remain and she began to develop her writing talents as a novelist due to her own personal life experiences. It was then that Untamed realized her gift should be shared with the world and she made the decision to become a published author. Best known for her gritty yet flavorful language, Untamed embraced urban literature to bring about knowledge and support through real life, every day stories with highly animated and lifelike characters. Her powerful words and straight up, no-chaser verbiage delivers punches that will leave you screaming for more.
In 2012, Untamed released her debut novel entitled, Never Again…No More through One Karma Publishing to rave reviews. Untamed’s work has been featured in several print ads including Books On Blast by Urban Books, Authors, & Writers of America (UBAWA) and Kontrol Magazine. Untamed has also had several author features and interviews including noteworthy interviews with PD Radio and The Morning Cook Up Show which generates millions of listeners. Since that time, Untamed penned her second novel entitled, Never Again…No More II: Getting Back to Me in July 2013.
Writing is truly a passion for Untamed and it is her hope that her writing will fulfill her purpose to touch lives, encourage growth and give a voice to the voiceless. Staying true to this goal, Untamed will continue to share her gift of writing for years to come as she delivers it to you real, raw and purely Untamed!
She currently resides in Georgia with her husband and children. 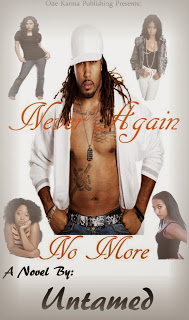 Born and raised in Atlanta, Lucinda, LaMeka, Charice, and Trinity are best friends with very similar backgrounds. They have all fallen victim to the perils of teen pregnancy. After each one becomes love struck to the bitter end; they realize that their dreams, ambitions, and planned future must be put on hold. While they struggle to find themselves, each one tries to survive in the game called life. Once they find out that their consequences are a little costlier then they imagined, it's the decisions they've made that creates their troubles. 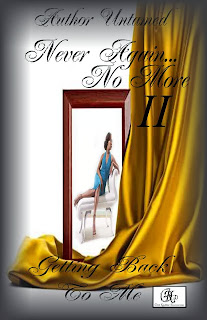 The ladies of Never Again…No More are back! Lucinda, LaMeka, Charice and Trinity all hit a crossroads as troubles surmounts, and the hope of a better life comes into fruition as each lady struggles to turn their lives around. It won’t be easy, and the consequences can be detrimental and in some cases even deadly. But what will they sacrifice for a chance at a life they’d always dreamed of? And at what costs? Facing your fears can come at price and these ladies come face to face with their worst nightmares. No matter what, changes are on the horizon for all of them. And change, well, that can be a beautiful thing…or an ugly truth. They’ll find out that getting back to themselves will require some tough decisions. What will they decide? To succumb to their situations or will they learn how to truly say never again…no more.

Both books are available on Amazon as well as other ebook retailers.
Until Next Time,
O. Keeys (Ann Keeys and many others I go by)
Domestic Seduction on sale now.