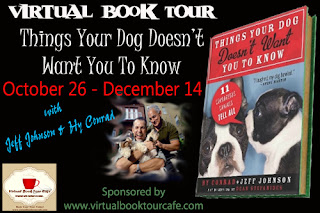 1.                  What inspires you as a writer?
I love telling a good story.  I’m not sure what makes a story worthwhile, but I know it when I think of it and then can’t stop thinking of it.  The idea for this book came from watching a series of infomercials.  “Things the Banks Don’t Want You to Know”, “Things the Government Doesn’t Want You to Know.”  My friend Jeff and I turned to each other and started joking.  “Things Your Dog Doesn’t Want You to Know.”  And that was it.  The title came first.
2.                  When did you have that ah ha moment when you knew you were a writer?
One of my early projects was a collection of short mysteries for Sterling Publishing.  I loved the twisty little plots and dreamed, in my oversized way, that a Hollywood producer would happen upon my work and call me up.  And, although it took a few years, that’s basically what happened.
Out of the blue one day I got a call.  The man on the other end said, “My name is Andy Breckman.  I just created a mystery TV show and I need stories.  So I went to a bookstore and found your books and tracked you down.”
That’s not how I became a writer, but that’s how I became a TV writer.  The show was “Monk” and it was probably the best eight years of my professional life.
3.                  What is your writing process?
I sit down around eight, as soon as the cobwebs start clearing, and write until I hit 1,000 words or find something better to do.  Then I come back in the afternoon and review the work and work on plotting for the next day.  Right now, I’m under contract to write two books in six months.  I’m cranky a lot.
4.                  Tell us about your favorite character and why you chose to write about them?
In “Things Your Dog…” we have 11 dogs, each one writing ten little essays about their secret lives, from a Chihuahua living in a stylish purse, to the world’s dumbest Yellow Lab.  My favorite would have to be Sarge, the German Shepherd.  In each of his stories, Sarge has a job and winds up losing it.  Whether it’s sniffing drugs for the police or working nights in a junkyard, things never work out.  Finally, Sarge gets adopted by a real family.  But he still thinks it’s a job.  That strikes me as a perfect metaphor for my own life.  Just keep working.
5.                  What are you currently working on?
I have a mystery series that just started called Abel Adventures.  The first book, “Rally ‘Round The Corpse,” is already on the shelves and the second is on its way.
The project that’s driving me insane is the Monk novels.  A few months ago, the people at Obsidian Press asked me to take over writing a mystery series based on the Monk characters.  The first one, ‘Mr. Monk Helps Himself”, will be out next year.
6.                  Any upcoming events?
Working, walking the dogs and eating.  That’s about it until May.
7.                  If you could be anyone you like, who would you be?
A thin, good-looking Alfred Hitchcock.
8.                  Do you have any advice for new writers and something that a seasoned vet can learn?
Don’t write too detailed an outline.  Figure out where you need to be by page 100 or 200 or 300.  But in-between those mile markers, let the story lead you.  You’ll run into problems, sure.  But writing is all about solving problems and making them into assets.
9.                   Where can your followers find you?
I’m at hyconrad.com and thingsyourdog.com.  Also please look up my page on Facebook.
10.              Any last words?
Everything in publishing today seems to be about marketing; getting yourself out there.  But there’s no real substitute for just being good.  Work at your craft and read – a lot.  A writer who doesn’t read isn’t a writer.